When it comes to Yemeni food, Europe is critically underserved. Lebanese, Syrian and Palestinian places dot western European capitals. Their qualities vary. I’ve had some astoundingly mediocre exorbitantly priced Lebanese food in London, for example, though Beirut’s Liza has a branch in Paris and one Lebanese television correspondent I met covering peace talks in Switzerland once swore to me that his favorite shawarma place was by the train station in Geneva (I am unable to provide independent confirmation of said shawarma places’ quality). For Yemeni food, however, it’s a struggle to find anything—particularly out of the UK, which has long hosted a large Yemeni community. 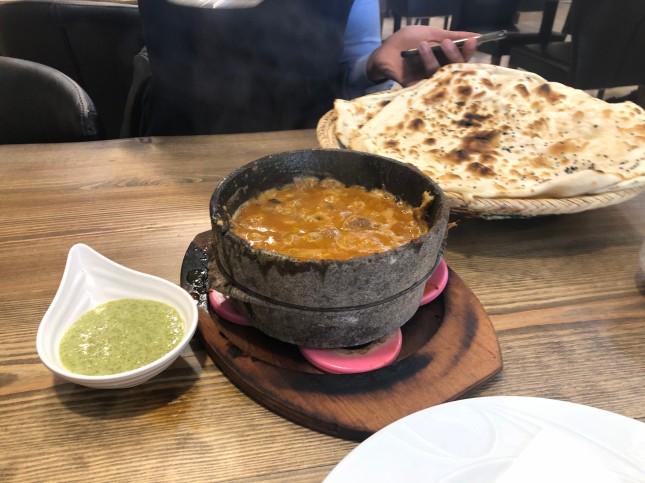 With the influx of Yemeni refugees to Europe following the war, however, its unsurprising that changes are afoot and, for a host of reasons, I guess its unsurprising that Berlin was among the first cities in Europe to get a Yemeni restaurant. Germany itself has long played a key role in diplomacy and scholarship in Yemen (a disproportionate amount of on-point Yemen analysis is written by German women with names starting with the letter “M”), simultaneously coming to serve as home for increasing numbers of Yemenis who’ve managed to gain asylum. About two months ago, the appropriately named “Jemenitisches Restaurant” opened up in the borough of Neukolln. The buzz around the place was such that I fielded about half a dozen invites from various Yemenis and Yemen-focused people based in Berlin. I ended up heading there for lunch with my friend Munther.

Set off the main street, the restaurant is roughly indistinguishable from its surroundings save the indicative visage of Sanaa’s Bab al-Yemen. The clientele was quite mixed. On one extreme, there were the representatives of the ever-increasing Yemeni community in Berlin, a politically diverse though largely cordial grouping who traveled for a taste of the familiar. On the other were the tables of Germans who’d traveled for a taste of exotic, their unacquaintedness with the culinary offers on hand underlined by odd decisions like ordering fattoush at a Yemeni restaurant or attempts to eat Salta with a spoon. In some sense, the scene could have served as a setting for a decent sitcom, albeit one that only I and maybe six other people would watch.

The food itself was, overall, good. The fahsa was acceptably meaty, though I wouldn’t have minded more helba; the chicken madhbi was also on point. The areeka was, as usual, an exorbitantly loaded mix of bread, cream, honey and dried fruits. Service was friendly.

Overall, I wouldn’t cast it as lifechanging Yemeni food but, especially in terms of its setting, it was certainly life affirming. Walking out to wash my hands after finishing my meal. I surveyed the crowd, looking over at the mix of Yemenis debating the intricacies of the seasonings of the rice to curious walk-ins who couldn’t distinguish between zurbian and a zebra. In a sense, it was everything a restaurant like this is supposed to be—a momentary trip home for some, a momentary escape for others.  In short, if in Berlin, its more than worth stopping by.

Crossposted at my medium.