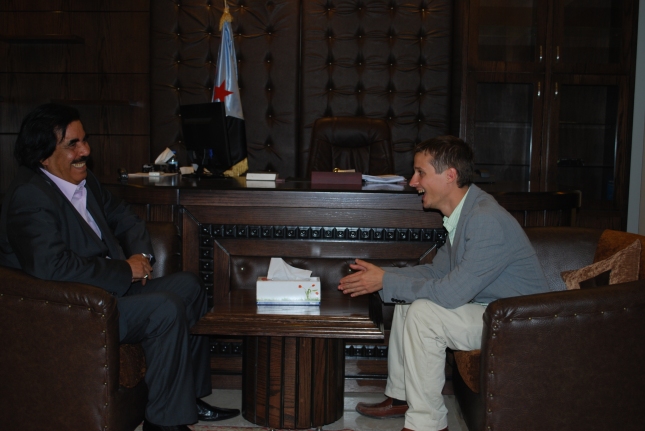 Sitting in a posh Beirut apartment complex, it was surprisingly easy to forget I was meeting with a man who is ultimately a historical figure. Up until July of 1994, of course, Ali Salem al-Beidh was in the center of it all–from unification and its aftermath to the almost incomparably bloody 1986 Civil War. As he sat across from me in the flesh, Ali Salem seemed almost separate from “Ali Salem:” the ability to maintain an astoundingly low key face to face presence, I’ve noticed, is a skill many Yemeni politicians seem to share.

There’s heavy competition, but Beidh’s political career still rivals that of even his most notorious colleagues. Emerging on top amidst a violent power struggle that killed many of his allies–in addition to thousands of others–Ali Salem found himself in the unenviable position of taking the helm of a Soviet client state as the USSR neared collapse, a detail that likely went a ways towards jumpstarting long-stagnant talks aimed at unifying North and South Yemen. The marriage, it seemed, was doomed from the start, and four years after he became Yemen’s first vice president, Beidh found himself in the middle of his second civil war in less than a decade–this time, on the losing side. He could be forgiven for using his subsequent exile as an excuse for a quiet retirement, but as is usually the case for men like Ali Salem, fading into obscurity just wasn’t an option.

As he reentered the public sphere to stake a claim for the position of secessionist par excellence, the former VP, not surprisingly, was met with a far from enthusiastic welcome in many quarters. The diwan’s of Sanaa-based politicians–and the offices of Sanaa-based diplomats–often seem to fill with derision when Ali Salem is brought up. Its not just his motives that are questioned, but often his sanity as well. That being said, such sentiments are far from universal, as the list of Yemeni politicians and tribal leaders who instructed me to send their regards to Ali Salem upon meeting him would suggest.

Beidh, of course, appeared more than in control of his mental facilities, speaking with the defiant confidence of a true believer. Its something that echoes what his former comrades have told me; its quite common, for example, to hear comparisons made between the ’emotional’ Beidh and the ‘cerebral’ Attas. And while he may be miles away in Beirut, his uncompromising stance certainly resonates with many in the south, where festering grievances have fueled fierce opposition to continued unity even among many who are too young to remember life under the PDRY. In the end, Ali Salem is just one of a number of key figures fighting for influence in a divided movement. But while many may seek to sideline him, its hard to imagine the outspoken exile will be retreating from the public sphere any time soon.

Story, for McClatchy newspapers, is here